Toronto, CANADA, May 3, 2016 – Baylin Technologies Inc. (TSX: BYL) (the “Company” or “Baylin”), a global provider of innovative antenna solutions for the networking, mobile and wireless infrastructure markets, today announced its financial results for the three months ended March 31, 2016. All figures are stated in United States dollars unless otherwise noted.

“We are very pleased to report positive Adjusted EBITDA of $0.3 million in the first quarter of 2016. While modest, it was in line with our expectations and more importantly reverses the substantial negative Adjusted EBITDA reported in the last 8 quarters”, said Randy Dewey, Vice Chairman, President and Chief Executive Officer. This quarter saw continuation of the upward trend in Revenues, making it the fifth quarter of sequential growth. With the higher Revenues, our gross profit and gross margin percentages also improved. With the head office move now behind us, our operating expenses declined in this quarter, to $4.9 million, which was approximately $1 million lower than Q4 2015.”

Mr. Dewey added: “While encouraged by the strong start to the year, led by our more competitive positioning with our major customer and by the growth in other strategically important product lines, there is still more to be accomplished in order to improve profitability and cash flow. Our primary focus remains on controlling operating expenses, improving margins, as well as building a stronger sales culture to achieve growth across all three of our product lines and diversifying our customer base.” 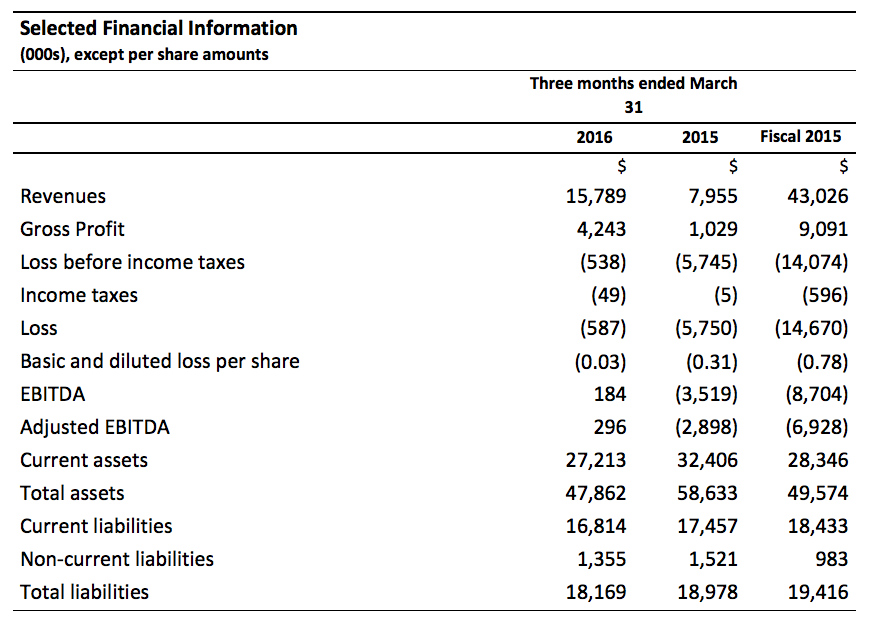 The Company’s complete financial statements and Management’s Discussion & Analysis for the three months ended March 31, 2016 are available at baylintech.com/investor-relations/ and www.sedar.com/.

Revenues
Revenues in the three months ended March 31, 2016 and 2015 were $15.8 million and $8.0 million, respectively, reflecting an increase of 98.5% year over year. The increase was due primarily to stronger shipments of Mobile products, particularly to our main customer, and to a lesser extent growth in sales of our Networking products. Sales of Infrastructure products in the current quarter were level with the prior year. Compared to the fourth quarter of fiscal 2015, Revenues increased by 21.6% in the current quarter.

Gross profit increased to $4.2 million (26.9 % of Revenues) in the three months ended March 31, 2016. This represented an improvement from Q1 of fiscal 2015 which was $3.1 million (24.0%). The improvement in gross margin (gross profit divided by Revenues) in fiscal 2016 was attributable to the higher production volumes (associated with the increased sales) amortized over an equivalent fixed cost base. Compared to the fourth quarter of 2015, gross profit increased by $1.1 million, or a 2.8 percentage point improvement.

Sales and marketing expenses of $0.9 million declined in the first quarter of fiscal 2016 from $1.2 million in the same quarter in fiscal 2015. Notwithstanding the decline in spending, payroll-related expenses were comparable with last year’s first quarter, reflecting the belief that hiring more sales people will yield benefits in driving the Company’s growth strategy in new business areas, thereby diversifying our revenue base and penetrating new, and growing markets. The overall decrease was primarily attributable to reductions of tradeshows, travel expenses and other related expenses as part of the Company’s cost reduction initiatives. Sales and Marketing decreased in the first quarter of fiscal 2016 from the fourth quarter of 2015, by $0.6 million, due to compensation accruals in Q4 2015.

G&A expenses for the three months ended March 31, 2016 decreased from the three months ended March 31, 2015 by $0.4 million. In the first quarter of fiscal 2015 the Company incurred management termination costs, including those of the former President and Chief Executive Officer and other executive management, in the aggregate amount of $0.6 million.

The Loss for the current period was $0.6 million, a significant reduction from the loss in the comparable period last year of $5.8 million. The improvement was the result of the positive EBITDA in 2016, as described in the MD&A.

Liquidity
The Company net cash declined by $1.4 million during the three months ended March 31, 2016, due to funding the working capital increase associated with the Revenue growth.

Following Fiscal 2015, a year characterized by significant changes made to address the operating losses and negative cash flow incurred in fiscal 2014 and 2015, the first quarter of fiscal 2016 saw a continuation of the growth in Revenues and reduction in overall operating cost, leading to the first positive EBITDA quarter in the last 8 quarters. Additionally the head office move to Toronto was completed by the end of the current quarter. The head office transition costs will smooth over the first half of 2016 as all functions are now fully transitioned. As these costs are now denominated in Canadian dollars, we expect the overall costs of the Canadian head office to be lower, benefitting from lower Canadian dollar relative to the US dollar.

In addition to the improved financial results, the market position for our products was strengthened as a result of the changes made in 2015. In particular our market position of our Mobile product line has substantively improved with our major customer from a year ago, where the momentum created in the latter part of fiscal 2015 carried into the first quarter of fiscal 2016. Our major customer is having early success with its new product launch, which was the primary factor in our Revenue growth in the current quarter. We note however this customer’s product launch was earlier than in prior years, thereby favourably impacting the current quarter, as opposed to the historical later quarter phasing. As a result, we currently do not expect mobile shipments in Q2 of fiscal 2016 to be at quite the same level as in Q1 of fiscal 2016.

U.S.-based telecommunication carriers are predicting growth in network capital spending in 2016, and we believe our Infrastructure products are well positioned to benefit from that occurrence. New Mobile customers announced in 2015 have awarded us several projects that we anticipate will positively impact the second quarter of fiscal 2016. As such, we anticipate revenue growth in our three business units in 2016.

Cost reductions and manufacturing efficiency efforts will continue into 2016 and we expect these improvements will lead to improved gross margins in the second half of fiscal 2016.

The over-arching focus for the Board of Directors and management in fiscal 2016 is to continue the momentum created in the second half of 2015, while prudently managing our liquidity. Exploring new opportunities in the Mobile market, continuing to diversify and expand the Networking customer portfolio, and further expanding the Infrastructure product portfolio will be the primary focus. Also, management will explore opportunities to increase its capital resources and liquidity in light of the anticipated growth and consequential requirement to fund increased working capital levels.

Baylin will hold a conference call to discuss its 2016 first quarter financial results on May 4, 2016, at 8:00 a.m. (ET). The call will be hosted by Randy Dewey, Vice-Chairman, President and Chief Executive Officer, James Newell, Chief Financial Officer and Clifford Gary, Corporate Controller and VP Finance. All interested parties are invited to participate.

Baylin uses EBITDA and Adjusted EBITDA to measure its financial performance and its future ability to generate and sustain earnings. EBITDA refers to earnings before interest (finance expenses, net), taxes, depreciation, and amortization and discontinued operations. Adjusted EBITDA refers to EBITDA less items of an exceptional nature outside of the ordinary course of business. Such items include, but are not limited to, certain exceptional, non-recurring share-based compensation, capital gains and losses, restructuring costs, recognition of significant provisions and other significant non-cash transactions. We do not believe these items reflect the underlying performance of our business. EBITDA and Adjusted EBITDA are non-IFRS performance measures. Besides net earnings, EBITDA and Adjusted EBITDA are useful complementary measures of pre-tax profitability and are commonly used by the financial and investment community for valuation purposes.

Baylin (TSX: BYL) is a leading global technology company with over 38 years of experience in designing, producing and supplying innovative antennas for the mobile, Networking and wireless infrastructure industries. We strive to meet our customers’ needs by being their trusted partner from initial design to production with an extensive portfolio of custom engineered solutions and leading edge off-the-shelf antenna products.