Key Outcomes for the Quarter

“We are encouraged by the continued sequential improvements in all of our key financial metrics in the quarter,” said Randy Dewey, President and Chief Executive Officer. “Sales were up across all three product lines. Our revenue growth offset approximately $0.6M in costs related to moving our head office to Toronto, a significant portion of which were charges that will not continue past Q4 of this year. In the quarter, we also took steps to optimize our working capital with better inventory management. The benefits of which were reflected on our balance sheet at quarter end.”

Mr. Dewey added: “We expect that our results in the fourth quarter will be similar to our performance in Q3. However, the vast majority of our turnaround efforts are now behind us, including bolstering our senior leadership team. Our primary focus remains building a stronger sales culture to fuel continued growth across all three of our product lines. We are increasingly diversifying our revenue in Mobile, seeing sales growth with major customers in Networking and building a strong pipeline in Infrastructure. We remain confident in our long-term opportunities and expect to drive continued performance improvements in fiscal 2016.” 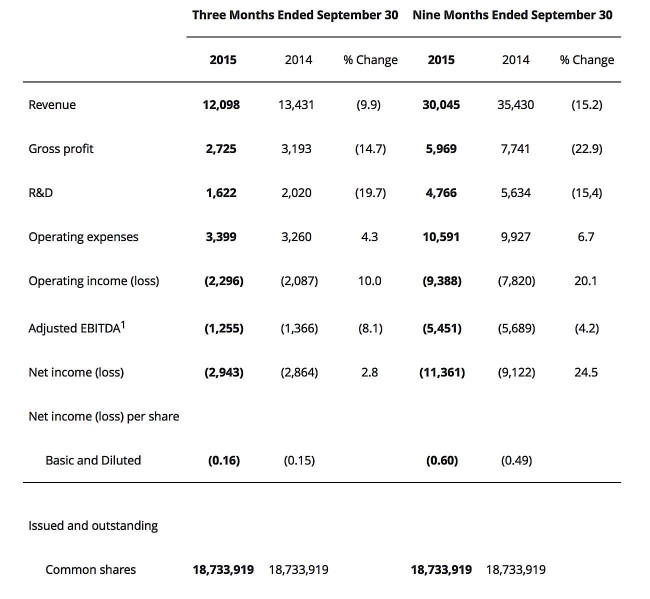 The Company’s complete financial statements and Management’s Discussion & Analysis for the three and nine months ended September 30, 2015 are available at baylintech.com/investor-relations/ and www.sedar.com/.

Revenues
Revenues for Q3 2015 were $12.1 million, an increase of $2.1 million over $10.0 million in Q2 2015. Compared to Q3 2014, revenues declined 9.9%. The year-over-year decrease resulted from a substantial reduction in orders from a key Mobile customer, which was offset, in part, by stronger sales in the Networking and Infrastructure product lines.

Research and Development
Research and development (“R&D”) costs were $1.6 million in Q3 2015, a decrease of 19.7% over Q3 2014. The year-over-year decrease in R&D costs was driven by a reduction in headcount which occurred at the end of Fiscal 2014. Other development costs were relatively stable due to a reduction in patent expenses. R&D costs in Q2 2015 was $1.5 million and was relatively stable when compared to Q3 2015.

General and Administrative
General and administrative (“G&A”) costs were $2.4 million for Q3 2015, compared to $2.3 million for Q3 2014. G&A expenses increased because of certain professional services rendered during the quarter and severance costs following the departure of a senior executive. G&A expenses were relatively flat quarter-over-quarter.

Adjusted EBITDA
Adjusted EBITDA was a loss of $(1.3) million in Q3 2015 and was relatively flat compared to Q2 2015. There were several expenses that drove a higher Adjusted EBITDA loss in the quarter. These charges were mostly related to the migration of the head office from Israel to Toronto, consulting on manufacturing optimization and recruit of key talent.

Liquidity
As at September 30, 2015, the Company had cash and cash equivalents totaling $12.3 million and working capital of $11.8 million. The Company saw an increase in trade receivables of $2.9 million compared to December 31, 2014. Approximately 70% of the cash used in the quarter related to our increase in accounts receivable due to our increase in sales over the same period. Our DSO was stable on sequential basis from the beginning of the year.

Baylin will hold a conference call to discuss its 2015 third quarter financial results today, November 13, 2015, at 8:30 a.m. (ET). The call will be hosted by Randy Dewey, Vice-Chairman, President and Chief Executive Officer. All interested parties are invited to participate.

Baylin uses EBITDA and Adjusted EBITDA to measure its financial performance and its future ability to generate and sustain earnings. EBITDA refers to earnings before interest (finance expenses, net), taxes, depreciation, and amortization and discontinued operations. Adjusted EBITDA refers to EBITDA less items of an exceptional nature outside of the ordinary course of business. Such items include, but are not limited to, certain exceptional, non-recurring share-based compensation, capital gains and losses, restructuring costs, recognition of significant provisions and other significant non-cash transactions. We do not believe these items reflect the underlying performance of our business. EBITDA and Adjusted EBITDA are non-IFRS performance measures. Besides net earnings, EBITDA and Adjusted EBITDA are useful complementary measures of pre-tax profitability and are commonly used by the financial and investment community for valuation purposes.

Baylin (TSX: BYL) is a leading global technology company with over 37 years of experience in designing, producing and supplying innovative antennas for the mobile, Networking and wireless infrastructure industries. We strive to meet our customers’ needs by being their trusted partner from initial design to production with an extensive portfolio of custom engineered solutions and leading edge off-the-shelf antenna products.