• Mr. David Wittwer was promoted to the role of Chief Technology Officer. Mr. Wittwer will oversee the engineering and R&D departments in Israel and Phoenix.

“In the quarter, we delivered double-digit revenue growth as well as improvements to gross profit and adjusted EBITDA, compared to Q1 2015” said Randy Dewey, Interim President and Chief Executive Officer. “Despite a still challenging macro environment for our Mobile product line, our Infrastructure sales have increased sequentially and the Networking product line continues to grow and deliver strong margins. With the improvement this quarter and further sales traction, we anticipate our financial performance to continue to improve in the second half of 2015. We appear to be on track towards our goal of being cash flow positive by the end of 2015.” 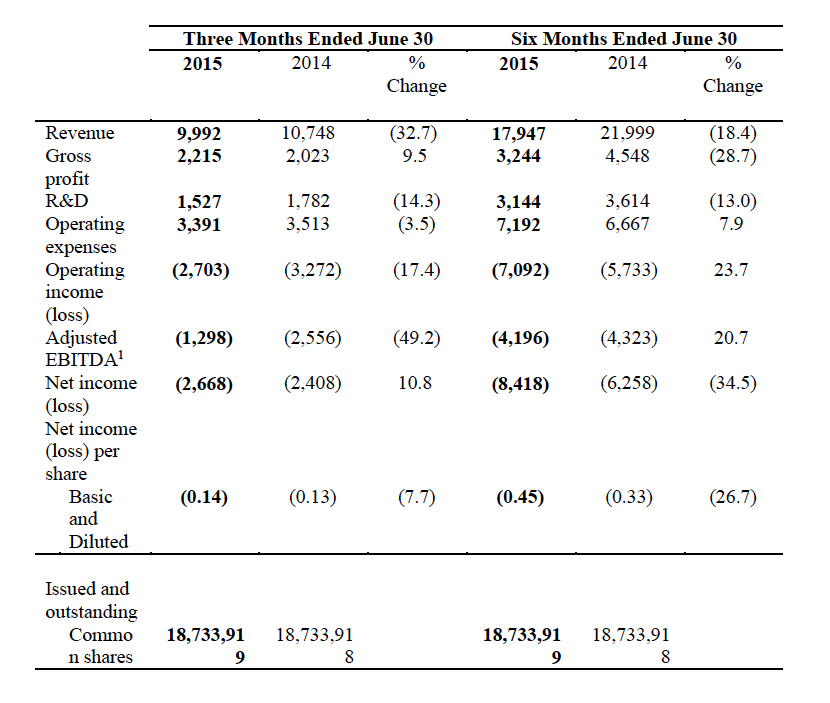 The Company’s complete financial statements and Management’s Discussion & Analysis for the three months ended June 30, 2015 are available at baylintech.com/investor-relations/ and www.sedar.com/.

Revenues Revenues for Q2 2015 were $10.0 million, an increase of $2.1 million over $7.9 million in Q1 2015, reflecting higher Broadband and Infrastructure product sales. Compared to Q2 2014, revenues declined 32.7%. The year-over-year decrease was a result of a substantial reduction in orders from a key mobile customer, which was offset, in part, by stronger sales in the broadband and infrastructure markets.

Sales and Marketing Sales and Marketing costs for Q2 2015 were $1.1 million, a 17.7% increase compared to $0.9 million in Q2 2014. The increase is due to the Company’s participation in more trade shows and recruitment of new sales and marketing employees, all aimed at driving sales momentum and greater brand awareness.

Net Income (Loss) Net loss in Q2 2015 was $2.7 million a decrease of $3.1 million over a net loss of $5.7 million in Q1 2015. Compared with Q2 2014, net loss increased by 10.8%. The year-over-year increase in net loss was a flow-through effect from the decrease in revenues during the quarter and an increase in certain non-cash expenses.

Baylin uses EBITDA and Adjusted EBITDA to measure its strength and its future ability to generate and sustain earnings. EBITDA refers to earnings before interest (finance expenses, net), taxes, depreciation, and amortization and discontinued operations. Adjusted EBITDA refers to EBITDA less items of an exceptional nature that are outside of the ordinary course of business. Such items include, but are not limited to, certain exceptional, non-recurring share-based compensation, capital gains and losses, restructuring costs, recognition of significant provisions and other significant non-cash transactions. We do not believe these items reflect the underlying performance of our business. EBITDA and Adjusted EBITDA are non-IFRS performance measures. We believe that, in addition to net earnings, EBITDA and Adjusted EBITDA are useful complementary measures of pre-tax profitability and are commonly used by the financial and investment community for valuation purposes.

Baylin (TSX: BYL) is a leading global technology company with more than 37 years of experience in designing, producing and supplying innovative antennas for the mobile, broadband and wireless infrastructure industries. We strive to meet our customers’ needs by being their trusted partner from initial design to production with an extensive portfolio of custom engineered solutions as well as leading edge off-the-shelf antenna product.